Check out this awesome photo taken by VIP's own Captain Tommy on Texas Wireline in Pompano Beach, Florida. Is it a sign from the fishing gods, or what?!

Written by Capt. Noah on Tuesday, 30 October 2012. Posted in Miscellaneous 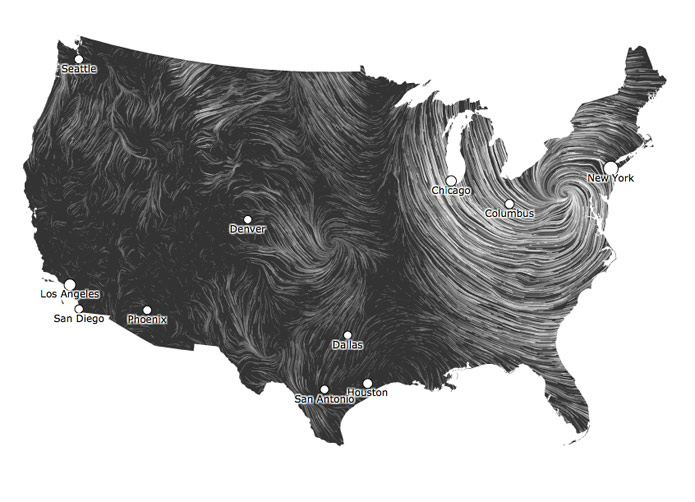 This may look like a piece of modern art, but it's actually an experimental wind map designed by some clever folks over at hint.fm. By using live wind data from the National Digital Forecast Database, the map renders wind speed and wind direction. The screenshot above was taken the morning of Tuesday, October 30, 2012, the day after Hurricane Sandy made landfall in the northeastern United States.

I wish they had included sea surface wind, but this still gives a pretty good indication for what the coastal winds look like, which can be very helpful for fishing.

The map is showing west winds for South Florida which should help lay down the rough seas from the past week. We just had our first cold front in South Florida and you know what that means? Sailfish time. I'd recommend heading out on one of our charters in Fort Lauderdale, Palm Beach, or Miami.

The first cold front of the season has rolled in and the sailfish are officially biting in South Florida.  Sailfish season generally starts in November.  Sailfish migrate south as the water and air temperatures drop.  You'll tend to start seeing a lot of kites being flown from the fishing boats.  Kite fishing is a technique used with live bait that works very effectively in South Florida.  Call or inquire online and will give you the latest sailfish season report. 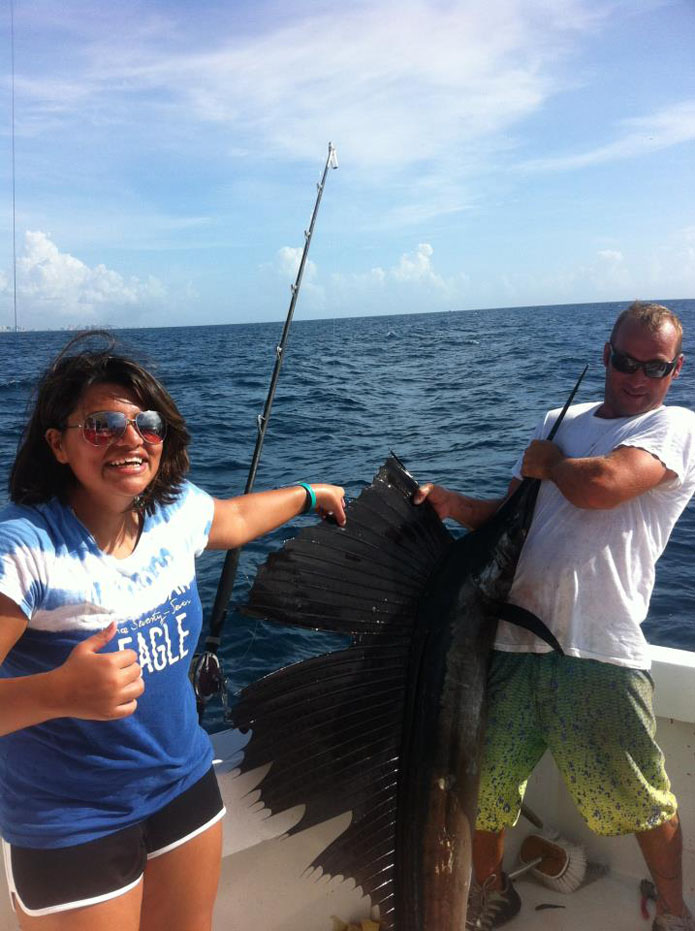 Another beautiful Fort Lauderdale sailfish.   There's nothing like catching your first sailfish on a trip to Fort Lauderdale.  Some of our clients decide to mount these beautiful fish so they can share their memory with friends and family back home.  Great catch! 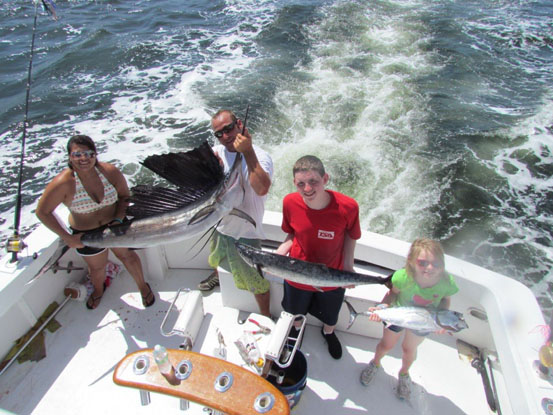 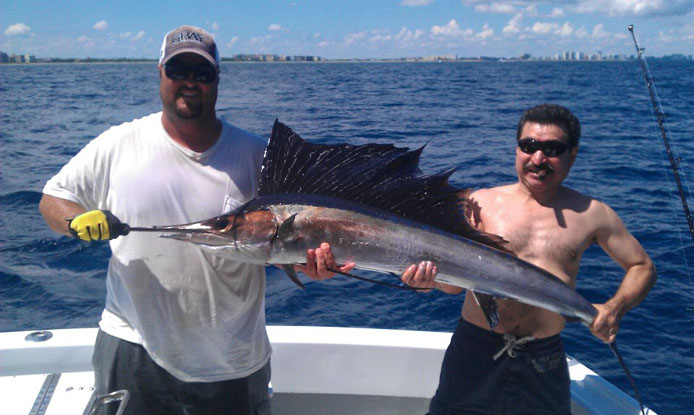 Pictured is a beautiful sailfish caught off the coast of Boca Raton.  Andre the mate on our Boca Raton fishing charter takes a quick picture with his client before releasing this sailfish.  Sailfishing in Boca Raton is best from December through March.  This Boca Raton sailfish was caught with live bait.

We can't get enough of GoPro cameras

Check out this sweet video montage of sailfish chasing a dredge outfitted with a GoPro camera. I especially like right around 4:10 seeing the other baitfish schooling with the dredge. So cool!

We've heard from our captains that they've been having good luck with sailfish fishing and dolphin fishing in Fort Lauderdale. We need to buy one of our boats a GoPro!

Get A Quote on your next fishing charter. We guarantee the lowest prices and the best service.

Get more information about Fort Lauderdale Fishing Charters including area and boat information and the types of fish our captains are catching.

There are two species of Sailfish (the Atlantic Sailfish and the Indo-Pacific Sailfish) that live in the warm waters of the world. They are members of the Istiophorus genus from the family of Istiophoridae. Their name is directly related to their huge dorsal fin that stretches the entire length of their back and resembles the sail from a sailboat. They have incredibly long bills and this is why they are considered billfish in sports fishing circles, along with marlins and swordfish. Sailfish are among the most popular big game fish caught in Florida.

Predominantly blue and gray, sailfish are also known to have black, purple, silver, subdued browns and green coloring. These are often highlighted by stripes of iridescent blue or silver specks. They grow quickly, as much as 1.20m and 1.50m in their first year. They can grow up to 3m in length and weigh as much as 200lbs when fully grown.

Kept to the side while swimming, and folded down, Sailfish are able to rise or lower their sail when they are excited or feeling threatened. This makes them appear bigger than they are and is a tactic used during feeding when they are herding groups of squid or smaller prey fish. Sailfish feed at mid-depth or on the surface and their diet consists of smaller pelagic fish such as tuna and mackerel, as well as squid.

Sailfish are extraordinary predators, with a few capabilities that they use highly effectively. They are among the fastest fish found anywhere in the world, reaching speeds nearing 70mph. Prey simply do not see them coming and if they do, they are unable to escape in time. In addition to this, Sailfish can change their colors almost instantly – a change controlled by their nervous system. They can quickly turn a light blue with yellowish stripes when excited, which completely confuses their prey and makes it easier to catch them. This characteristic also signals their intentions to their fellow Sailfish.

Any angler will confirm that Sailfish are a highly prized game fish. Their speed is absolutely breathtaking and they will leap high out of the water. They also hunt in schools, which mean that there is always a possibility of having a few of them on your lines at one time. When this happens and there are two or three (or more) Sailfish performing incredible leaps at the same time, anglers delight in the majestic and beautiful spectacle.

Among the easiest billfish to catch, Sailfish congregate in large numbers at different times of the year off the coasts of Panama, Costa Rica, Florida and Guatemala. Here is some information to help you with sailfish fishing in Florida:

It is always a good idea to have tackle designed for deception. These intelligent fish are often successfully caught using kites, dredges and skirts. A conventional medium weight setup works well, but for trolling a 50lbs setup can be used (because something bigger may always bite). If pitching bait then a 30lbs setup will work. Quality spinning reels are good choices for pitching baits, and something like an Accurate BX2 30 for trolling.

Although Sailfish can be caught on lures and frozen bait, live bait works better by far. Small mackerel, tuna and squid are recommended. If using lures, then troll rubber skirts such as Zukers with 12in lures. Trolled plugs can work but Sailfish often throw treble hooks when jumping. Poppers are sometimes used but not very successfully because of their bony mouths and when Sailfish jump, they frequently spit them back at high speed.

Our VIP Fishing Charters troll for Sailfish. Sometimes we locate them with lures and then throw them hooked bait when we see their dorsal fins chasing our lures. The best methods are definitely kites and dredges. This is how they work:

Call today and book your Sailfish Fishing Charter in Florida and be exhilarated.

on Wednesday, 18 January 2012. Posted in Miscellaneous

The Jupiter Billfish Tournament tourned to out to be another exciting event.  This year "Doing It All" took home the first place prize and close to $40K in prize money after catching 39 sailfish in the two day tournament!  The majority of the fish were caught off St. Lucie Inlet in 60 feet of water using live bait.  Congratulations to everyone that participated.

Starting to See the Sailfish Bite in Pompano Beach

Take a look at this Sailfish caught out of Hillsboro Inlet in Pompano Beach!  We are starting to see sailfish season pick up and it is getting exciting 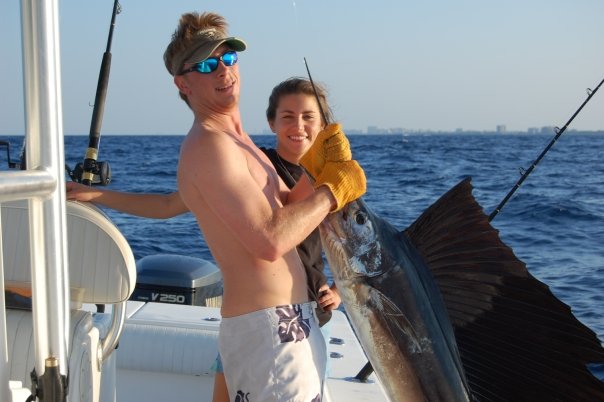 The first week of January should be an amazing week of Sailfishing from Boca Raton up to Boynton Beach.  If you really want to increase your chances of catching a sailfish we recommend catching or buying some live bait.  Everyone knows the sailfish can't resist those Goggle-eyes but any live bait should do the trick.  If you have the chance put out the kites and do some kite-fishing.  Besides being a great week for sailfishing expect to catch some dolphin, kingfish, cobia, skipjacks and blackfins.  Happy New Year and see you on the water!

Not Too Shabby for a Bunch of Canadians!

An Awesome Day of Fishing off Miami Beach

Kudos to Jerred and his friends on a terrific day of fishing off Miami Beach.  The list of fish they caught is an extensive one including: Spanish Mackerel, Blackfin Tuna, Yellowfin Tuna, Sailfish, Bonita, and Mahi-mahi!  Everybody had an amazing time and we can't wait for them to visit us again down in Miami!

Sailfish Season Is Heating Up

The recent gusting winds have created rougher than usual waters off the South Florida Coast, but it doesn't seem to have have affected the fishing too much.  All of our Palm Beach, Broward, and Dade County fishing charters are reporting great fishing at the point where there water changes color.  Debris and birds are also indicating large groups of fish.   Many of our Florida fishing captains are hauling in multiple dolphin and sailfish in short periods of time.  The Dolphin continue to bite around a depth of 200 feet and the sailfish at a depth of 100 feet.  We predict the good fishing to continue for weeks, as sailfish season heats up in South Florida!

Dolphin Are Biting and Sailfish Season is Beginning

All of our South Florida Fishing Boats are telling us the same thing.  The dolphin are biting!   Our fishing captains are finding them in all depths from 100 feet to 500 feet, from Pompano Beach and Fort Lauderdale down to the Florida Keys.  Our fishing charters are cleaning up.  We are also getting reports that the sailfish season has begun and we are catching more fish every day.  We've seen them traveling in groups as well.  Good luck out on the water everybody.

Written by Capt. Steve on Thursday, 01 December 2011. Posted in Miscellaneous