Best Places for Swordfish in Florida

Written by Capt. Noah on Thursday, 30 May 2013. Posted in Fishing Advice

Swordfish are among the most popular game fish in the world. They are simply enormous, intensely powerful and they ensure an incredible fight. Deep dives and surface jumps occur for hours once hooked and anglers are overwhelmed by the sheer challenge of catching these fish, often begging for the assistance of electric reels. The waters surrounding Florida are a veritable nursery for swordfish and the area is among the top world-wide destinations for catching this billfish. So where are the best places to find them off the coast of Florida?

This question has been much debated amongst local anglers for decades, and there are many opinions about where the swordfish hotspots are. In order to answer this accurately, we need to discuss the topography of the surrounding ocean floor, the spawning habits of swordfish and their feeding needs. Swordfish can be caught anywhere off the coast of Florida; but if you are looking for the fishing grounds with the highest chances of catching them then read on:

Ocean Topography off the coast of Florida

The land does not stop at the water’s edge. It continues underneath the ocean. Mountains, slopes, volcanoes, underwater canyons, coral reefs, ocean trenches, seamounts, abyssal plains and other continental slopes, shelves and land masses are prevalent everywhere. Currents push zooplanktons, fry and various other organisms that form the basis of the food chain into these crevices. This is where they congregate in numbers for safety, shelter and food. Practically every member of the underwater food chain benefits from these places, and swordfish are no exception. They frequent these geographical formations because it is an abundant food source, provides effective shelter and protects the smaller swordfish from their larger predators.

Swordfish Feeding Habits off the coast of Florida

It used to be thought that Swordfish were nocturnal predators. More anglers are now catching them during the daytime. The methods used to catch these fish are different. At night, Swordfish will come to the surface to feed where anglers mostly troll for them. During the daytime, they prefer to remain in deep waters where they are caught by deep-dropping baits with lights attached. This means that you can go to where there are large schools of pelagic fish for night fishing, or you can seek out underwater structures during daylight hours. Wherever you find their prey, you will find Swordfish.

Swordfish Migration Routes along the coast of Florida

Travelling with the major surface currents, Swordfish migrate along the Gulf Stream. This is directly off the coast of Florida and is the reason for the abundance of spectacular game fish in the area. It flows northward along the U.S. Continental Shelf, before going north-east toward the Azores. From there, Swordfish continue in a clockwise direction that brings them back to their spawning grounds in late spring.

Swordfish Spawning Grounds off the coast of Florida

Adults congregate during the months of April and May to spawn. Similar to salmon in that they seem to return to their breeding grounds, they return yearly to the same spots. Their spawning locations are varied; one is about 350 miles east of Trinidad and the other about 550 miles east of St. Maarten. They also spawn in the gaps between the larger Caribbean islands; such as the Mona Passage, the Florida Straits, the Yucatan Straits, the Windward Passage, the Anegada Passage and the gap between Puerto Rico and the Virgin Islands. This means that Swordfish spawn in the Caribbean and their fry float down-current towards Florida’s east coast and the northern Gulf of Mexico. This is called their nursing areas and they are a few miles off the coast of Florida. Juveniles will remain here for the first two or three years of their lives before undertaking migration efforts.

Now that we understand the behavior of Swordfish, we can work out which are the best places to catch them in Florida. We know that we are looking for underwater structures where we can find their prey. We have learnt that they pass Florida on the Gulf Stream when migrating and we understand there are many juveniles in the nursing areas. This leads us to consider the Florida Keys and the east coast of Florida to be prime locations. These inspiring fish swim in the Gulf of Mexico, but they are much more prevalent on the eastern coast. However, we can narrow it down further.

Ocean topography suggests the continental shelf that runs along the eastern coast of Florida is littered with ocean trenches, underwater canyons and other geographical features. The continental slope drops off sharply and provides very deep waters close to shore. The biggest canyon is closest to Islamorada and the Florida Keys. A few short miles further is another ocean trench infested with prey for Swordfish – and it is closer to Palm Beach and Miami. Fort Lauderdale, Destin and Stuart are also fantastic hot spots; but if you are prepared to travel then you can catch Swordfish from anywhere in Florida.

Call now to book your Swordfish Fishing Charter and thrill in the power of these enormous monsters. 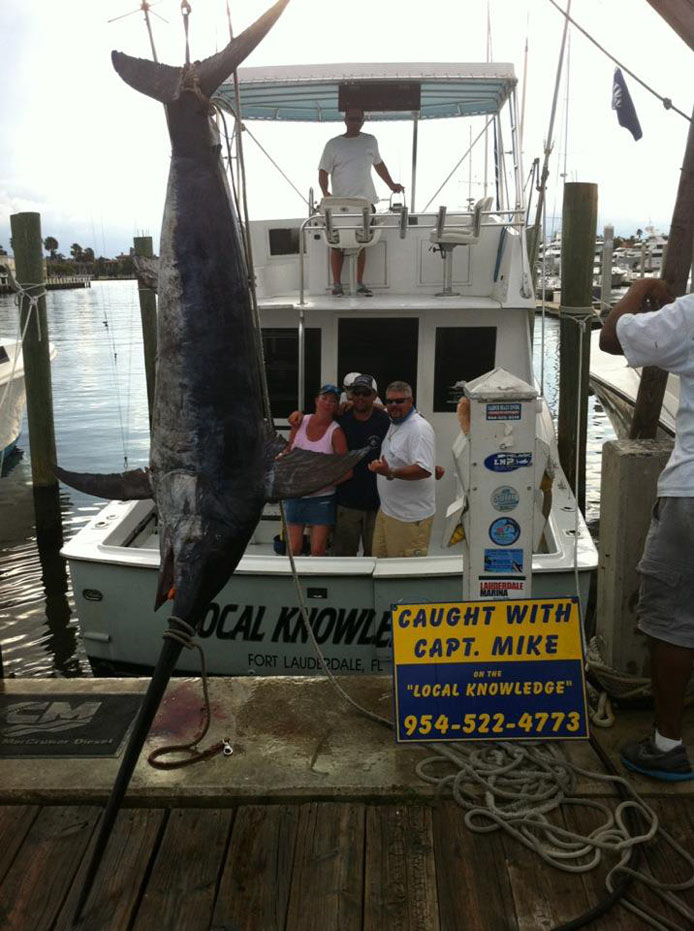 Can you believe the size of this Fort Lauderdale swordfish?  This beast weighed in at few hundred pounds.  Specialized sworfishing trips in Fort Lauderdale last a full day and go faurther offshore than our normal charters.  This one was caught while deep dropping.  Friends and family ate swordfish steaks for days after this trip.

The sole member of the Xiphiidae family, Swordfish has a long flat bill that resembles a sword – hence their name - and they are commonly referred to as broadbills. This bill makes them similar to other billfish species, such as marlin and sailfish, but they are very different physiologically and they are not members of the same families. Swordfish is an incredibly popular game fish for sports anglers, but they are rather elusive. These migratory, predatory fish are widely distributed throughout tropical parts of the Atlantic Ocean, Pacific Ocean and Indian Ocean. During the daytime they prefer to hunt near the ocean floor among structure, at incredible depths of around 1 800ft (but they have been recorded as deep as 9 442ft). At night time, they come nearer the surface.

Swordfish are enormous fish known for their phenomenal strength, commonly reaching lengths of nearly ten feet and weighing anywhere from 200lbs to 500lbs. The largest specimen ever reported measured 14.90ft and weighed 1 400lbs. Females are bigger than males and the Pacific Swordfish are known to be larger than the Atlantic and Mediterranean counterparts. These extraordinary fish have very well-rounded, elongated bodies and will lose all their scales and teeth by the time they reach adulthood.

Popular belief dictates that Swordfish use their bill to spear their prey. This is not true. Instead, their “sword” is used to slash their prey in order to inflict injury and make them easier to catch. Swordfish rely on their amazing agility and speed in the water as an advantage to catch prey. Easily among the fastest fish in all the oceans, they are known to reach astonishing speeds of nearly 60mph. Solitary fish, they can be found in very loose formations on occasion. Swordfish are often seen basking on the surface, airing their dorsal fin. They are also known to jump powerfully (called breaching) in an effort to dislodge pests.

During the summer Swordfish will migrate into colder waters and the Gulf Stream current is a favorite route for them. Their common diet consists of pelagic fish such as barracuda, mackerel, silver hake, herring, rockfish, butterfish, bluefish and lanternfish but they are known for their preference for squid. Small prey is swallowed whole while larger victims are slashed viciously with their sword. A fully grown Swordfish is sometimes preyed on by killer whales and occasionally brave shortfin mako sharks. Juveniles are more vulnerable and are eaten by many predatory fish. Many dead or dying shortfin mako sharks have been found with broken swords embedded in their heads, which proves just how dangerous it is for anyone to prey on the Swordfish. This means that these awesome fish have very few enemies, besides man. Even we need to be very careful in order to survive an encounter with them.

Swordfishing in Florida is extremely popular among recreational fishermen and fishing charters. There are a number of ways to catch them but the most consistent method is deep-drop fishing. In order to offer Swordfish more natural bait, the boat is often left to drift. These fish are gigantic, really, and they require strong tackle and equipment. Getting your bait to their incredible depths requires the use of weights. Here is some information about how to catch an awesome Swordfish in Florida:

Where to find Swordfish

Off the coast of South Florida, the waters are warm and Swordfish bite throughout the year. During fall and winter the really big monsters return from the Caribbean into the Gulf Stream and this is undoubtedly the best time to catch them. This giant of the deep loves seamounts, irregular bottom contours and structure and the current is phenomenally strong at the bottom of the Gulf Stream. It is so strong that it will pull your deep baits ahead of your boat, where Swordfish lie in wait to ambush prey that is pulled past by the force of the current.

During the day bait needs to be presented at a variety of depths, some as deep as 2 000ft, but at night they can be dropped around 300ft. Anglers attach glow lights or deep waterproof battery operated lights to their bait, or imitation lures with built in lights are used when fishing with lures. Our Swordfish fishing charters in Florida use mainly standard baits such as whole mackerel, herring, mullet or bonito. Squid is the best bait to use but needs to be kept or defrosted in salty brine in order to retain its firmness and prevent it from being easily mutilated or pulled off completely. Live bait can also be used highly effectively.

Catching Swordfish is an incredible challenge. This fish possibly requires the most tackle, equipment and expense for any success. These are some tips when dropping baits for them:

Swordfish are giants of the deep and their bill is sharp enough to slice right through you. These fish are powerful and do not like being caught. They will hurt you at the first available opportunity and damage your boat extensively. Safety is of paramount importance and we caution you to take no shortcuts and remember it. Never allow a live swordfish onto your boat, ever. Heed this advice and you may live to tell the tale of that magnificent Swordfish that you caught off the coast of Florida.

Call us now to book your Swordfish Fishing Charter in Florida and fight true power.